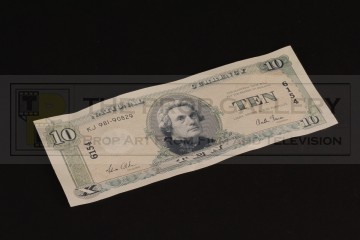 An original prop from the production of Charlie and the Chocolate Factory, the 2005 film adaptation of the famous Roald Dahl book starring Johnny Depp as Willy Wonka under the direction of Tim Burton.

A note identical to this one can be seen used by Charlie Bucket (Freddie Highmore) as he finds money in the street and buys a Wonka bar containing the elusive Golden Ticket. Custom printed by the production the realistic note features various imagery, serial numbers and a denomination of 10 with no currency marked given the timeless setting which is not stated to be a specific country, the currency of dollars can only be assumed after bystanders attempt to purchase the Golden Ticket from Charlie in the shop.

The note measures approximately 6.75" x 2.75" and remains in excellent condition with some minor edge wear and four points of residue to the verso where previously mounted in a frame, otherwise very fine.

An affordable and displayable artefact from this well received adaptation.