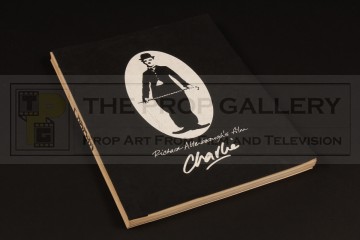 An original script used in the production of Chaplin, the 1992 biographical feature starring Robert Downey Jr under the direction of Richard Attenborough which details the life of screen icon Charlie Chaplin.

This original shooting script is dated October 1991 and comprises of 122 pages bound between covers of textured thick black card with the front featuring the instantly recognisable and iconic silhouette of Charlie Chaplin and the original working title of the movie 'CHARLIE'. This was the personal script of actor Bill Paterson who portrayed the stage manager in the movie and the interior cover page bears his signature in blue pen with the spine of the script hand inscribed 'CHAPLIN' in black marker.

The script measures 11" x 8.5" and remains in excellent original condition with a minor mark to the rear cover and only very very minor edge wear and toning, overall exceptionally fine.

A beautiful example of original production material from this Academy Award nominated biopic.