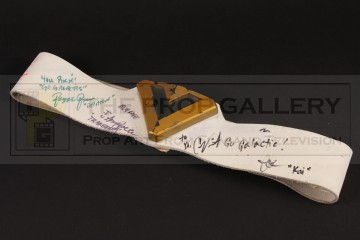 From the seventh season Power Rangers Lost Galaxy this is an original hero Ranger belt as seen worn by the principal cast throughout the series. Constructed from white leather the belt features a large buckle of cast resin with a painted finish, to the rear a side release clip and Velcro fastening is present.

The belt remains in very good production used condition with expected edge wear, light soiling to the leather and some paint loss to the buckle.

A highly displayable and recognisable artefact from this classic franchise.