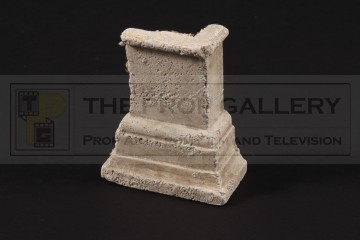 This section formed part of the large scale Venice building miniature used at the climax of the movie which was built in approximately 1:3 scale and filmed at Pinewood Studios in July 2006. The destruction of this miniature was then integrated with the live action plates shot on location to provide the finished footage.

Constructed from plaster this miniature building section measures approximately 4.5" x 3.5" and remains in good screen used condition, it is inscribed 'B' the to the rear.