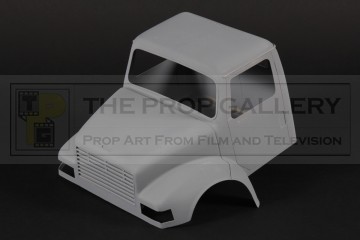 An original miniature created for the production of the 2006 James Bond picture Casino Royale starring Daniel Craig as the suave spy.

This truck cab was created by the model unit for use on the miniature vehicles created for the scenes at Miami International Airport. This style of cab was used specifically on the miniature TV reporting van created in miniature intended to be reporting the unveiling of the new Skyfleet airliner. Reference of the genuine vehicle that was used when filming the live action airport sequences at Dunsfold Airfield in Surrey, England was used in the creation of the miniatures and the last image shown here is of the genuine vehicle while the two previous images show the miniatures set up created for production.

Constructed in vacuum formed plastic the cab is finished in grey primer and was a spare ultimately surplus to requirements that was retained by renowned model maker Bill Pearson, the cab measures approximately 8" across the wheel arches and 8" long. It remains in excellent production made condition, very fine.

A curious miniature artefact from one of the most celebrated franchises in cinematic history.