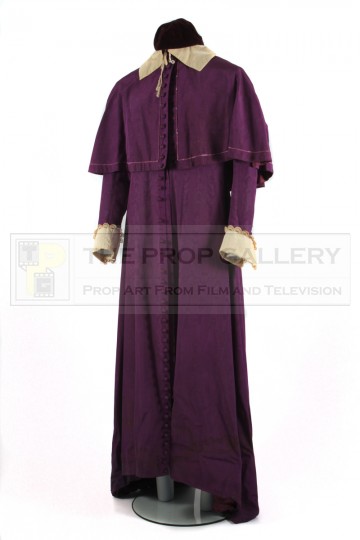 This costume was custom made for the production by leading industry costumiers Bermans and Nathans for Charlton Heston as Cardinal Richelieu and was worn in both The Three Musketeers and its sequel The Four Musketeers which were originally intended as one three hour epic but were ultimately split in to separate movies. Comprising of a floor length robe of pattered purple material with button fastenings and decorative white cuffs and accompanied by a mozetta with white collar, both retaining original Bermans and Nathans labels which remain blank, not uncommon for wardrobe from this production. The hat with this costume differs in construction from the one used on screen which is made from the same material as the robe, this one being of purple velvet and likely unused, it is believed larger collars were placed on the mozetta for filming, now absent, and some minor alterations made to the cuffs for an unknown reason. Obtained by The Prop Gallery directly from the family of producers Alexander and Ilya Salkind.

The wardrobe remains in good vintage production used condition exhibiting some age related discolouration to the collar and cuffs, lacking several buttons with dirt to the bottom of the robe which is consistent with that seen on screen.