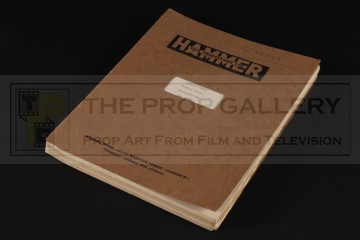 This original production used script comprises of 103 pages bound between front and rear covers of brown card with the front featuring the logo of Hammer Film Productions with a window cut out which shows the title of the movie to the interior cover page which is dated 18th September 1961. To the front are additional pages which detail the various sets and a detailed character list with the top right corner of the front cover being hand inscribed 'J NEEDS' for editorial supervisor James Needs, a veteran of Hammer productions.

The script remains in excellent production used and vintage condition exhibiting only minor edge wear and toning, extremely fine throughout.