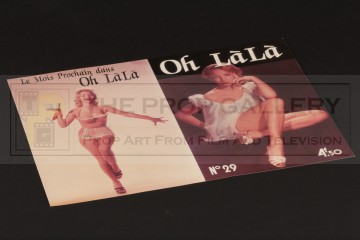 An original prop from the production of Back to the Future Part II, the second instalment in the classic science fiction trilogy starring Michael J. Fox and Christopher Lloyd.

This Oh LaLa cover was custom made by the production for use on the magazine belonging to Biff Tannen (Thomas F. Wilson) in 1955 which was used alongside the Greys Sports Almanac, the central plot device which Marty McFly (Michael J. Fox) attempts to recover at the Enchantment Under the Sea Dance. The custom made cover features the title of the fictional publication, issue number and price with an image of Venetia Stevenson which was taken from a genuine 1950's adult magazine. To the verso is a further image of a model with French text to the other side.

The magazine cover measures approximately 12" x 9" and remains in excellent production made and unused condition with only minor edge toning, very fine.

An instantly recognisable and displayable artefact from this classic science fiction trilogy.