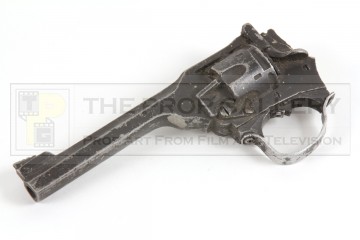 An original prop used in the production of Dunkirk, the 1958 British war picture directed by Leslie Norman.

Webley revolvers such as this can be seen used by British troops and Members of Parliament in various scenes on the picture. Constructed from a hard grey resin like substance this stunt weapon has no moving parts and is entirely non-functional, finished in black paint the prop measures approximately 7.5" long and is missing the grip in its entirely and lacking the trigger, significant paint wear and some minor chips present with sand remnants visible around the cylinder from use on the beach.

An extremely rare artefact from this well regarded war picture.