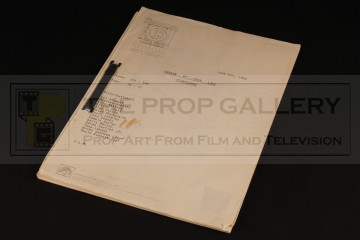 An original storyboard sequence used in the production of Dragonslayer, the 1981 fantasy picture directed by Matthew Robbins.

This original production used storyboard sequence comprises of approximately 40 pages of storyboard copies taken from the original renderings each bearing at least one illustration with some pages featuring several, these relating to shots of Galen and the dragon rising from the lake. The sequence contains a number of revisions regarding Galen not having his shield on the advice of stunt coordinator Terry Walsh and is bound with a front cover featuring a production logo, the address for Pinewood Studios and a distribution list which is ticked in red pen next to the name of special effects supervisor Brian Johnson who utilised these storyboards during the production and later received an Academy Award nomination.