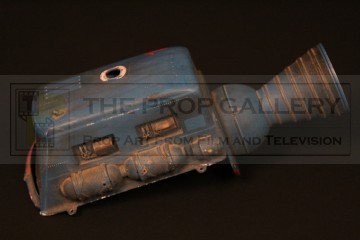 This rear section formed part of the large scale Blue Midget filming miniature built by Derek Meddings' Magic Camera Company for series II. The engine section is constructed in heat formed plastic detailed with various kit parts and metal gauze, the thruster section is metal and houses a bulb which is wired to light to achieve the glow effect seen on screen, this is operated by a switch on the side of the model. The piece is intricately detailed, hand painted and weathered with a dirtied down finish.

The large scale Blue Midget filming miniature was cannibalised by Mike Tucker and Alan Brennan with the majority of the model becoming the basis for the White Midget miniature used in the series VII episode Ouroboros, this represents a rare surviving part of the original miniature.

The section in in good production used condition with some minor paint loss, it measures approximately 10" long.

A displayable and recognisable spacecraft element from this cult science fiction series.