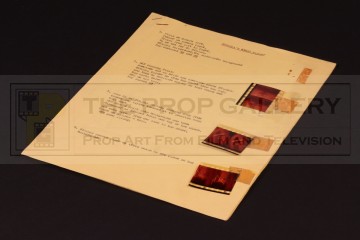 An original document used in the production of The Blue Max, the 1966 World War I picture starring George Peppard under the direction of John Guillermin.

These camera notes were used during the production of the highly regarded flying sequences seen throughout the movie. The five page staple bound document is type written on yellow paper and covers various flying sequences starting with the first flight of Lt. Bruno Stachel (George Peppard), it lists in extreme detail the camera movements and close ups required and features ten clippings of 35mm motion picture film applied with tape to be used as reference.

The document measures 10" x 8" and remains in excellent vintage condition throughout with some minor edge wear from handling, the tape which secures the film clippings has yellowed in the years since the production with some having worked loose, overall very fine.

An exceptionally rare and interesting example of original production material from this highly regarded war picture.