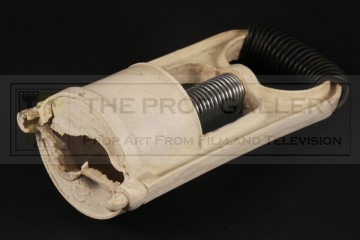 From the 1979 Key to Time serial The Armageddon Factor starring Tom Baker as The Doctor this is the original blaster used by Davyd Harries as Shapp who is disarmed by the defence mechanism and the weapon is seen crashing to floor after which it is picked up by The Doctor. Constructed from resin with a metal sprint to the centre and a rubber pipe handle the blaster is finished in cream paint and exhibits some damage to the bottom which occurred during filming, a piece is clearly seen breaking away on screen and this prop can be screen matched to the one picked up by The Doctor.

The blaster measures approximately 10" long and remains in good condition with the aforementioned production inflicted damage.

A rare and displayable artefact from the Tom Baker era of this cult science fiction series.