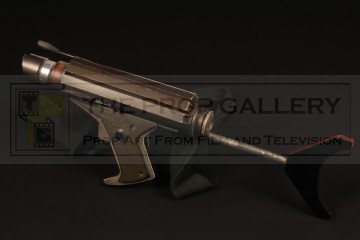 These futuristic style weapons can be seen used by various characters, including the principal cast members, throughout the series. This example is one of the originals built by noted model maker Martin Bower for series one of the show, constructed from perspex and EMA plastic parts it features a telescopic stock and a material strap with a brown paint finish and some tape detailing. This particular prop was also used practically in scenes where flash charges were utilised to simulate firing and features wiring to the interior with a removable end piece where batteries could be accommodated, this to control the charges via a button on the handle. The gun has been signed by Gareth Thomas who starred as Blake and Carol Royle who portrayed a mutoid in the episode Duel, these hand inscribed in black and gold pen respectively.

The prop measures approximately 17.5" long increasing to 25" when the telescopic stock is extended, it remains in generally excellent screen used condition with some age related wear and minor paint loss, overall very fine. Over the years there have been numerous examples of these props being replicated by enthusiasts and being passed of as original, this represents an incredibly rare opportunity to acquire a fully complete and entirely original example of this instantly recognisable weapon.