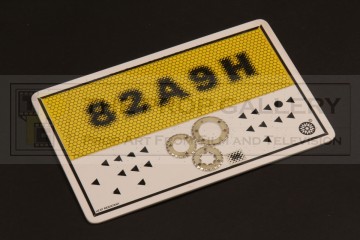 From the series three episode The Harvest of Kairos this is the original computer prediction card used on screen by Servalan (Jacqueline Pearce) and Jarvik (Andrew Burt). Created by the BBC Visual Effects Department the card is constructed from white perspex and detailed with various Letraset transfers tape and plastic washers, the card features a yellow top half with a honeycomb pattern and the code '82A9H'.

The prediction card measures approximately 5.75" x 4" and remains in excellent production used condition with only minor surface wear and some paint loss to the verso, overall very fine.

This represents an extremely rare example of a unique hand prop utilised by a principal character and a highly displayable artefact from this cult science fiction television series.