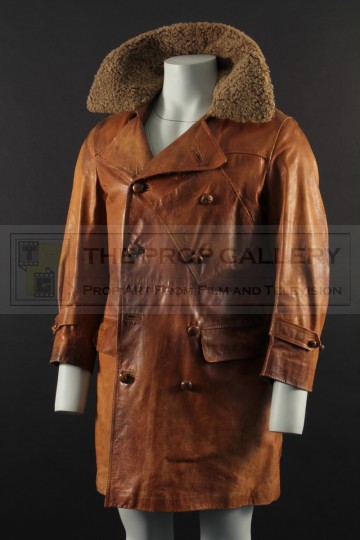 An original costume used in the production of Biggles, the 1986 science fiction adventure picture starring Neil Dickson in the title role.

This World War One style flying coat was bespoke made for the production by noted theatrical costumiers Morris Angel & Son and worn by Neil Dickson as pilot James "Biggles" Bigglesworth. The high quality double breasted coat is traditionally constructed in heavy tan coloured leather with a woollen collar and features various pockets and leather covered buttons, the surface of the coat has been intentionally weathered and distressed with dye to provide an old and heavily used appearance. The costume is lined to the interior and features its original Morris Angel & Son label which is hand inscribed 'MR NEIL DICKSON, JAN 85' in ball point pen and further inscribed 'BIGGLES NO.2' indicating that this was change two of the costume and is indeed one of at least two coats used during filming.

The flying coat remains in excellent screen used condition with some wear consistent with use during the production, lacking one button to the front and one to the right cuff, otherwise very fine.

This represents an incredibly rare example of principal character costume and arguably the definitive wardrobe artefact from this classic movie.