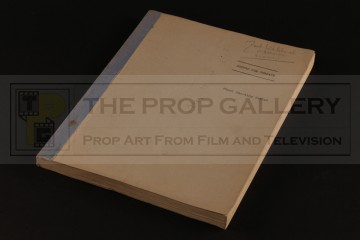 An original script used in the production of Beyond the Curtain, the 1960 drama picture directed by Compton Bennett.

This original production used script comprises of 108 pages bound between front and rear covers of grey card with the front hand inscribed with the name of second unit director Derek Whitehurst who utilised this script during filming. To the interior parts shot by Whitehurst on the second unit feature extensive hand inscribed annotations, accompanied by a fold out map of Berlin and period postcard which were retained within.