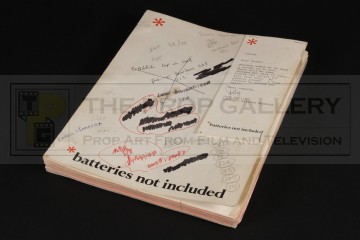 An original script used in the production of Batteries Not Included, the 1987 science fiction comedy directed by Matthew Robbins.

This script was issued to and used during filming by Frank McRae who portrayed Harry Noble. The script comprises of 114 multicoloured pages bound between front and rear covers of white card with the front featuring the title of the movie stylised *batteries not included and a similar production card stapled to the top corner which is dated July 1986, this is type written to McRae from Matthew Robbins' assistant Judy Marlin and is hand signed by her in pen, it advises that the script if for his eyes only. There are two interior cover pages present both of which are stamped 'BNI 0092' in red ink, as is every page of the script, this a security stamp linking the script to McRae, the cover pages are additionally stamped 'AMBLIN, CONFIDENTIAL, DO NOT COPY', the second features the date July 22, 1986, much of the script comprising this date on blue pages, a large quantity of revisions are present on pink and green pages dated August and September respectively. The script features highlighter pen throughout on McRae's lines and is annotated throughout in his hand, numerous notes to cover, interior covers and front pages, some obscured by marker pen however remaining largely legible including lengthy notes relating to his character and comparing him to legendary boxer Muhammad Ali.

The script is ironically accompanied by a memo on production stationary from associate producer Gerald R. Molen dated December 15, 1986 insisting that all scripts are returned to Amblin following the completion of principal photography, this hand inscribed with McRae's name and comprising three staple bound pages with two being a list of crew and their script numbers, McRae's name highlighted with script number 92 corresponding with the stamp present to the interior script pages.

The script remains in very good condition bearing in mind it saw such extensive used during the production, minor edge and corner wear is present from use and handling with minor cover soiling

An exceptional example of original production material used by a principal cast member during the making of this popular science fiction picture.