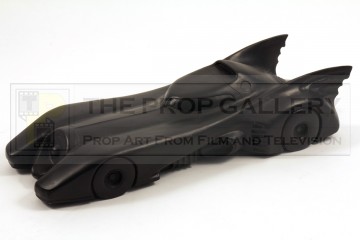 An original maquette used in the production of Batman, Tim Burton's 1989 superhero blockbuster starring Michael Keaton as the caped crusader opposite Jack Nicholson in his unforgettable portrayal of The Joker.

This is an original maquette created during the production process of the now iconic Batmobile visioned by Academy Award winning production designer Anton Furst. From Furst's design a scale maquette of the Batmobile was sculpted in clay from which several of these maquettes were created for approval, the piece is cast in hollow fibreglass and features a matte black paint finish. The final behind the scenes photograph presented here shows an identical model on Anton Furst's desk in his office at Pinewood Studios during the production.

A highly displayable artefact from the production of this Academy Award winning superhero classic which requires no introduction.