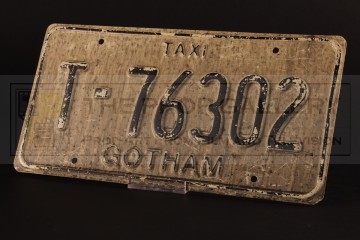 An original licence plate used in the production of Batman Returns, the 1992 superhero sequel starring Michael Keaton as the caped crusader under the direction of Tim Burton.

This licence plate is one of a number custom made for the production and used on the various cars around Gotham City with this example being specifically for use on a taxi. The plate is constructed from vacuum formed plastic with raised lettering and features the registration number 'T-76302' with 'GOTHAM' underneath and 'TAXI' above. The prop is hand painted and heavily weathered to appear dirty and distressed with four holes used to attach it to a vehicle.

The licence plate measures approximately 12" x 6" and remains in excellent production made condition with only light wear, very fine.

A highly displayable artefact from this classic of the superhero genre.