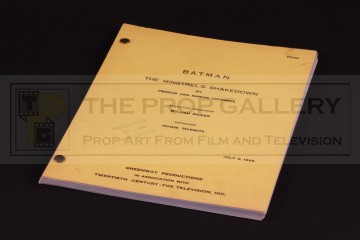 From the Season Two episode The Minstrel's Shakedown broadcast in September 1966 this original production used script comprises of 69 blue pages in addition to a cover page, cast list and set list bound between front and rear covers of yellow card. The front cover features the name of the series and episode title with writer and producer credits and is dated July 5, 1966, it is stamped in blue ink ' RECEIVED, JUL 7 1966, JOSEPH SCHRIER'.

The script remains in excellent production used condition with only very very minor cover wear, exceptionally fine for a script which is over fifty years of age.

A rare and extremely fine example of original production material from this classic television series.