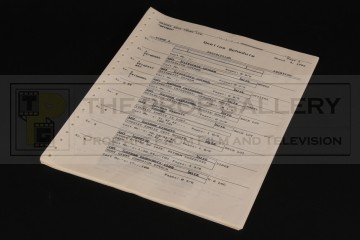 This is an original one line schedule which is essentially a shortened version of the more detailed shooting schedule used by the production when planning the filming of the movie. The 30 page document is headed 'WARNER BROS. PRODS LTD' and 'BATMAN' with the date March 4, 1988, some eight months before shooting commenced at Pinewood Studios, it includes a breakdown of the scenes with specifics noted to the side relating to locations and miniature effects, one minor hand inscribed annotation is present. This being an early draft it includes a number of sequences which differ significantly from the final film. Some of the more notable differences include the following

A rare and interesting example of original production material from this Academy Award winning superhero classic.