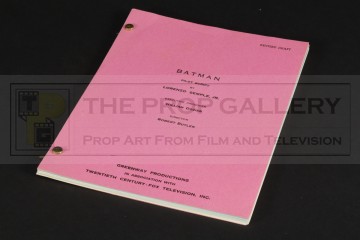 For the series pilot broadcast in January 1966 this original production used revised draft script is dated September 3, 1965 and covers both Hi Diddle Riddle and Smack in the Middle, representing the pilot in its entirety. The script comprises of 63 pages bound between front and rear covers of textured pink card with the front featuring various production details. The script is heavily revised throughout to include yellow, blue and green pages which feature various dates in September and October 1965.

An exceptional example of original production material from this classic television series.