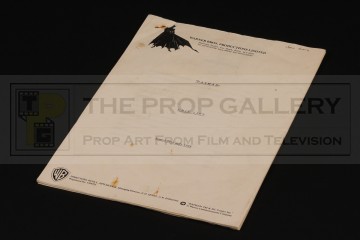 This unit list was issued to special effects maestro John Evans who was responsible for the building of the numerous gadgets used by Batman and also a supervising member of the team who built the Batmobile. This ten page staple bound document is dated 27th July 1988 and lists contact details for the various crew members involved with the movie from high ranking production members such as Tim Burton, Jon Peters and Anton Furst through to accounts and transport staff. The front cover features a Batman logo and is headed 'WARNER BROS PRODUCTIONS LIMITED' with the name 'JOHN EVANS' hand inscribed in faded pen. The unit list is accompanied by a letter dated 1992 and addressed to John Evans at Pinewood Studios detailing the use of smoke machines intended for use on a later unknown project.

The A4 size document remains in very good production used condition exhibiting some rusting to the staple and minor staining to the cover with some toning and wear from handling, overall fine.