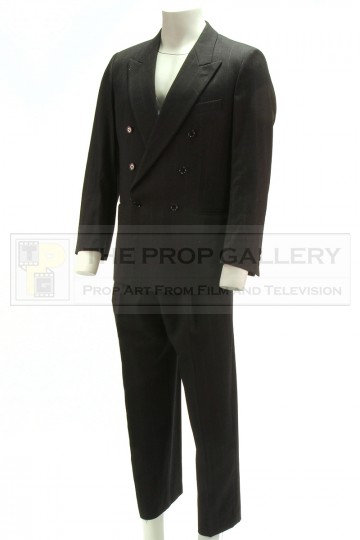 An original costume used in the production of Tim Burton's 1989 superhero blockbuster Batman starring Michael Keaton as the caped crusader opposite Jack Nicholson in his unforgettable portrayal of The Joker.

This suit was obtained by the production and worn by a supporting artist as one of a number of people seen around Gotham City throughout the movie and bears particular resemblance to one worn by a employee of the Gotham Globe newspaper. The Andrew Fezza branded double breasted two piece suit is constructed of black wool and features a wide pinstripe with makers label to the interior of the jacket.

The jacket is sized 40" with 33" trousers, both remain in good condition exhibiting minor surface wear.