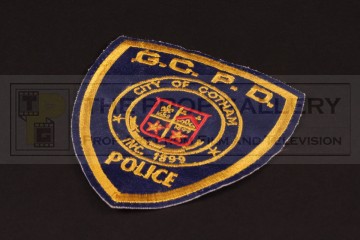 An original costume patch from the production of Tim Burton's 1989 superhero blockbuster Batman starring Michael Keaton as the caped crusader opposite Jack Nicholson in his unforgettable portrayal of The Joker.

Patches such as this can be seen worn on the jackets of the Gotham City Police in various scenes of the movie. The blue and gold embroidered patch features the acronym for the Gotham City Police Department with its emblem to the centre, it measures approximately 4.5" x 4" and remains in excellent production made condition, very fine.

A recognisable and displayable artefact from this Academy Award winning superhero classic.