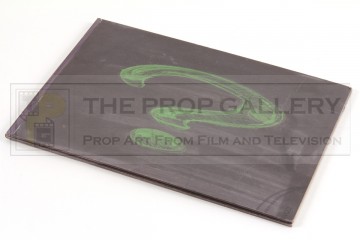 An original riddle used in the production of Batman Forever, the 1995 superhero picture starring Val Kilmer as the caped crusader.

This is an original prototype riddle created by the art department as they conceptualised the riddles to be utilised by Jim Carrey as The Riddler. This prototype is for the third riddle which is delivered to Wayne Manor and reads " THE EIGHT OF US GO FORTH NOT BACK, TO PROTECT OUR KING FROM A FOES ATTACK" and features pop up knights on horseback which are hand drawn and coloured and lacking a castle to the centre which was once present in a similar fashion to the screen used riddle, this relating to the game of chess and the answer to the riddle which is of course chess pawns. The folder in which the riddle is contained is constructed from coloured in artists board hinged with tape and features the instantly recognisable green question mark which is synonymous with the production.

The riddle measures approximately 11" x 7.5" when closed and 22" long when opened, it remains in good production used condition with the pop up elements no longer functional due to the castle to which they were joined being missing, otherwise fine with light edge and surface wear.

An interesting production artefact from this ever popular superhero franchise.