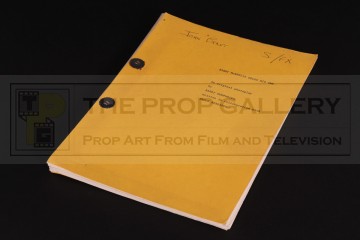 Barry McKenzie Holds His Own

An original script used in the production of Barry McKenzie Holds His Own, the 1974 comedy sequel directed by Bruce Beresford.

This original production used script is dated December 1973 and comprises of 87 pages bound between front and rear covers of yellow card with the cover featuring the title of the picture and writing credit to Barry Humphries and Bruce Beresford, this hand inscribed with the name of special effects artist John Gant who utilised this script during the production.