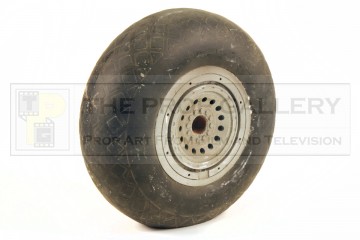 An original prop used in the production of Memphis Belle, the 1990 war picture directed by Michael Caton-Jones.

This large scale B-17 wheel was used on one of the various miniature aircraft built by the production, constructed from foam filled fibreglass the wheel is finished in black and silver paint and has had part of it sanded flat specifically for use on a parked aircraft which can be seen most notably as they wait to take to the sky on the runway which was achieved using such miniatures.

A rare and displayable miniature effects artefact from this classic war picture.