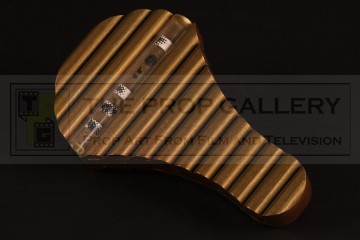 From the 1980 series three episode Volcano this device can be seen used by Avon (Paul Darrow) aboard The Liberator. This unique handheld prop was built by the BBC Visual Effects Department and is constructed from an ergonomically designed base of wood with half dowel applied to create a textured surface, finished in metallic gold paint and features a section of perspex to the centre with futuristic style markings likely to represent a measurement device or similar.

The device measures approximately 7" long and 4" at its widest point, it remains in excellent production used condition with only minimal surface wear and lacking some stickers which appear to be present on screen, extremely fine.

A rare example of an original hand prop and a displayable artefact from this cult science fiction television series.