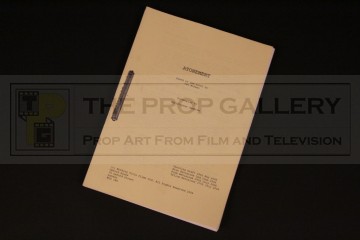 An original script used in the production of the 2007 romantic drama Atonement starring James McAvoy and Keira Knightley.

This production used script, dated 18th May 2006, consists of 108 pages with a cover of yellow paper bound by a metal binder. The script contains numerous blue, pink and yellow revision pages which are dated 2nd June, 25th July and 27th July respectively, this script was issued to model unit director of photography Peter Tyler who was responsible for filming the Balham tube station flooding scenes which were achieved in miniature at half scale and filmed at Shepperton Studios.