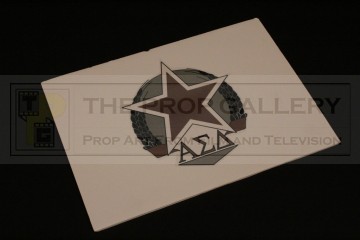 James Bond: The World Is Not Enough

An original sign created for the production of the 1999 James Bond picture The World Is Not Enough starring Pierce Brosnan as the suave spy.

Atomic Energy Agency signs such as this can be seen in the underground nuclear missile facility in Kazakhstan where Bond (Pierce Brosnan) confronts Renard (Robert Carlyle). Constructed from foam core board with n affixed decal of the AEA emblem which interestingly uses Greek characters rather than Russian.

The sign measures approximately 12" x 8" and remains in good condition with some light edge wear. With no obvious mounting points it seems likely that this is an unused production made backup.

An affordable artefact from one of the most celebrated franchises in cinematic history.