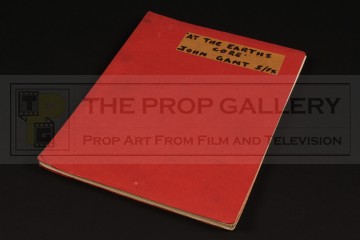 At the Earth's Core

An original script used in the production of At the Earth's Core, the 1976 science fiction fantasy picture starring Doug McClure and Peter Cushing which was based on the novel by Edgar Rice Burroughs.

This original production used script is dated July 29, 1975 and comprises of 94 pages bound between front and rear covers of red card. The script contains several revised pages on pink paper which are dated 5th December 1975 and to the front cover features tape which is hand inscribed 'AT THE EARTHS CORE, JOHN GANT S/FX' by special effects artist John Gant who used this script during the production.