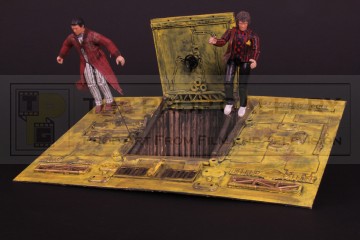 These miniature figures were created by the BBC Visual Effects Department under the supervision of designer Jim Francis and used for the effects shot as Arthur Dent (Simon Jones) and Ford Prefect (David Dixon) are expelled from the airlock aboard the Vogon Constructor spacecraft in episode 2. These unique props are adapted from commercially available action figures of the period which have been painted to resemble the main characters to include the addition of custom made clothing such as a jacket and bag, these are presented on a custom made display designed to represent the miniature airlock.

The figures each stand 4" high with the base display measuring approximately 12" x 7.5", they remain in excellent screen used and vintage condition.