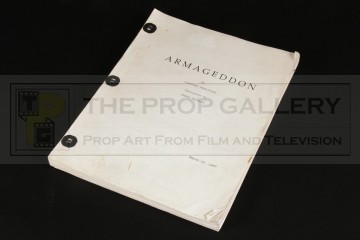 An original script used in the production of Armageddon, the 1998 science fiction disaster picture starring Bruce Willis under the direction of Michael Bay.

This original production used script is dated March 28th, 1997 and comprises of 120 pages in addition to a front cover which features the movie logo with writing credit below, it remains in very good production used condition exhibiting edge and corner wear from use and handling.