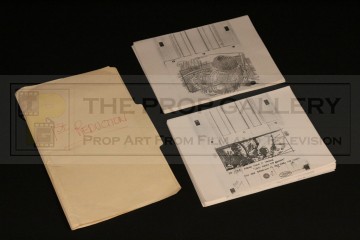 Original storyboards used during the production of David Lynch's 1984 film adaptation of Dune, based on the novel by Frank Herbert.

These storyboards were created at Apogee Inc who were originally contracted to provide the visual effects for the picture, headed up by effects pioneer John Dykstra who had previously won an Academy Award for his work on Star Wars before forming his own visual effects company in the late 1970's. Ultimately Apogee did not provide the effects and pulled out of the project altogether.

This lot consists of ninety-seven production storyboards depicting various scenes on the movie, these are presented in an original manilla folder which is hand inscribed to the cover '1ST REDUCTION'. These are reduced size storyboard copies created at Apogee and are on A4 paper with the actual storyboard part of the page measuring approximately 7" x 5", the pages were possibly intended to be trimmed to this size but this never occurred.

The storyboards remain in excellent condition with only very minor edge wear having been stored in the folder which exhibits some light creasing, particularly to the verso, overall very fine.

A fascinating insight into the production process of this box office flop which later achieved cult status with science fiction fans.