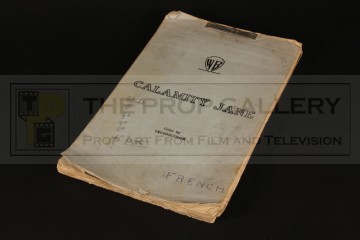 An original script from the production of Calamity Jane, the 1953 musical starring Doris Day in the title role.

This script was used during the subtitling process for the French release of the movie, comprising 97 foolscap size pages in addition a front cover of light blue card which is hand inscribed 'FRENCH' with other notes, this featuring the Warner Bros. logo and the title of the movie, general data, billing and synopsis pages also present to the front. The script is dated November 1953 which pre-dates the French release of the movie by over five months and features a wealth of hand inscribed annotations throughout relating to the subtitling and clearly saw extensive use during this process.

A very rare and extremely interesting example of original material from this classic picture.