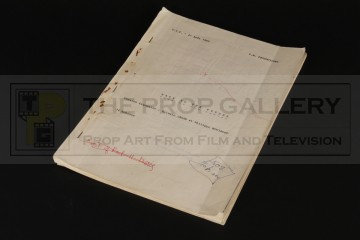 Back to the Future

An original script from the production of Back to the Future, the first instalment in the classic science fiction trilogy starring Michael J. Fox and Christopher Lloyd under the direction of Robert Zemeckis.

This script was used during the dubbing process for the French release of the movie, comprising 54 staple bound pages in addition to a front cover featuring the title of the movie and the date 21st August 1985 which pre-dates the French release. The script was clearly the working copy for the dubbing and is extremely heavily annotated throughout in various coloured pen, every single page featuring hand inscribed notes, without exception, names of voice cast noted along with other minor changes to better represent French culture.

The script remains in very good vintage condition exhibiting edge wear from use and handling with some rust transfer to the cover.

A very rare and extremely interesting example of original material from this classic science fiction trilogy.