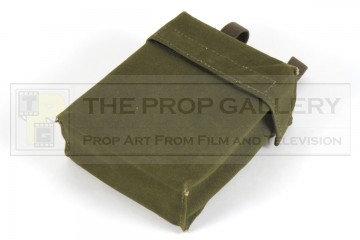 An original costume element used in the production of Aliens, the second instalment in the popular Alien franchise directed by James Cameron.

This is an original utility pouch as worn by the United States Colonial Marines throughout the movie. Constructed from green hard wearing military style canvas with attached belt loops the pouch opens via a flap to the top which is fixed by a strip of Velcro, the pouch has been filled with two sections of light removable foam to maintain its shape.

The pouch stands approximately 7.5" high, or 9.5" to the top of the belt loops and approximately 6" wide, it remains in excellent production used condition throughout.

A rare and desirable example of an original Colonial Marines costume element.