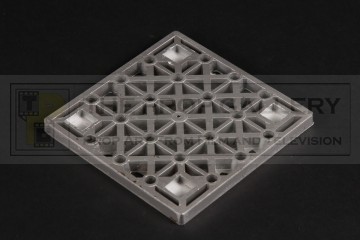 Miniature floor tiles such as this were used on the quarter scale Sulaco Dropship bay set and also feature in the climactic sequence featuring the Alien much of which was filmed using miniatures, constructed from resin with a silver finish the tile measures 4" x 4" and remains in excellent production used condition with some minor paint wear, overall fine.