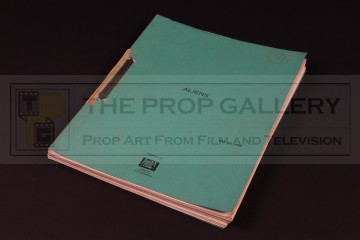 An original script used in the production of Aliens, the second instalment in the popular Alien franchise directed by James Cameron.

This production used first draft script is dated May 30 1985 and consists of 121 pages bound within a front and rear cover of green card. The cover features the 20th Century Fox logo to the bottom and is hand inscribed with the issue number 87 in silver pen to the top right corner, this is also mirrored on the interior cover page. This early version of the script features numerous differences to the final cut of the film with a number of scenes having been dropped or changed.

The script remains in excellent production used condition throughout with only very minor edge wear, overall fine with the addition of tape to the bound edge to add strength to the cover. This does not detract from what is an excellent example of Cameron's first draft.