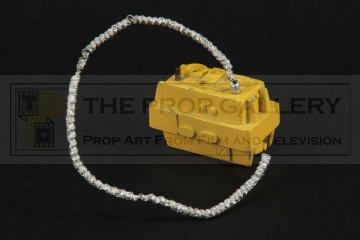 This miniature pump formed part of the Sulaco Dropship bay miniature set which was constructed at 1:12 scale of the full size Pinewood Studios set. The pump is constructed from wood with a foil wrapped wire hose and is hand detailed with a number of small kit parts giving it a very industrial feel, the underside of the miniature shows the remains of glue where it was attached on set.

The pump measures approximately 2.5" x 2" x 1.5" with the hose 12" long, it remains in excellent production used condition while lacking two small pieces of detail from one side with only minor paint wear to the edges.

A highly displayable miniature artefact from this science fiction classic which was awarded the 1986 Academy Award for Best Visual Effects.