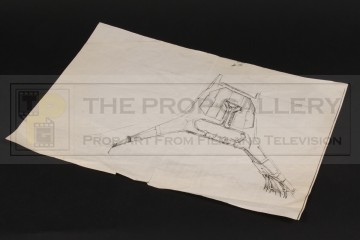 This production used concept design is a production issued copy of the original rendering believed to have been created by director James Cameron and depicts the Atmosphere Processing Plant, it was utilised by the miniature effects unit during the production of the Academy Award winning visual effects sequences.

The concept measures approximately 16.5" x 11.5" and remains in good production used condition exhibiting some significant wear and a tear from use and handling.