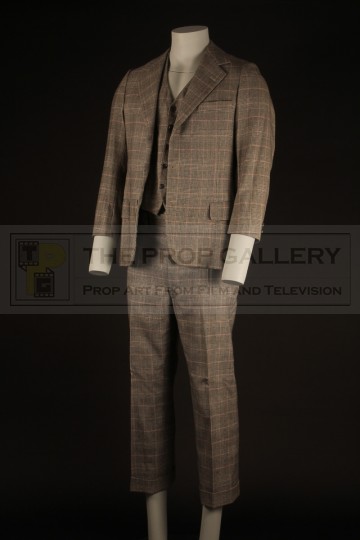 An original costume used in the production of The Hindenberg, the 1975 disaster picture directed by Robert Wise.

This suit was worn on screen by Alan Oppenheimer as Albert Breslau throughout the movie and can be screen matched to various scenes by its distinctive pattern. The three piece suit was bespoke made by leading industry costumiers Western Costume and to the interior pocket features their label which is type written '2210-1 ALAN OPPENHIEMER' (SIC) and is further hand inscribed 'LOU' in black pen, likely from use in a later unknown production. All three pieces of the costume also feature later Western Costume ink stamps with the waistcoat and trousers also beating Western barcode labels.

The suit remains in excellent vintage and production used condition throughout with no noteworthy damage, very fine.

A rare example of original wardrobe from this Academy Award winning disaster picture.