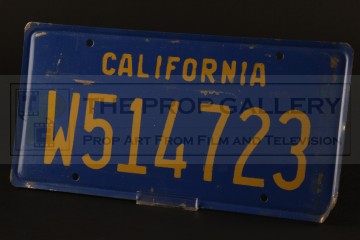 An original prop used in the production of Airwolf, the American television series created by Donald P. Bellisario.

From the Season 2 episode The Hunted broadcast in October 1984 an identical licence plate can be seen used on a photography van, this example likely from the front of the vehicle owing to the lack of stickers. Constructed from painted metal the plate features the registration number 'W514723' and 'CALIFORNIA' above in stencilled lettering with four holes used to attach it to the vehicle.

The licence plate measures approximately 12" x 6" and remains in good vintage production used condition with some surface wear and bending to one corner.

A displayable artefact from this popular series.