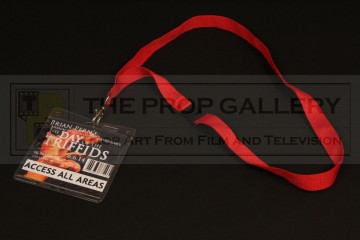 Brian Pern: A Life in Rock

An original prop used in the production of the 2014 comedy spoof rockumentary series Brian Pern: A Life in Rock starring Simon Day in the title role.

This access all areas lanyard features a card custom printed by the production bearing a Triffid graphic and the title of the show, Brian Pern's musical version of The Day of the Triffids, in addition to the date and location, the SSE Wembley Arena, London where shooting took place on September 23rd 2014. An identical pass can be seen worn in the hilarious scene where the security guard refuses Brian Pern (Simon Day) access to the Arena.