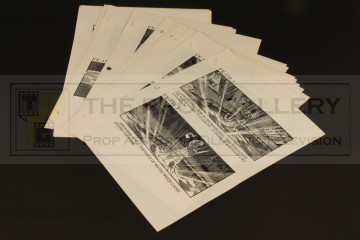 An original storyboard sequence used in the production of The Abyss, the 1989 science fiction adventure picture directed by James Cameron.

These storyboards were created by John Bruno and Phillip Norwood and utilised during the production of the Academy Award winning visual effects sequences. This storyboard sequence covers the memorable Pseudopod sequence which was created at premier effects house Industrial Light & Magic under the supervision of Dennis Muren using what was at the time groundbreaking and sophisticated animation and computer software which included a primitive version of what would later become Photoshop.

The production issued storyboard sequence comprises of over sixty printed illustrations spanning a total of 29 pages with descriptions of the action taking place below each, the collection features a highly detailed shot by shot breakdown of the sequence with some minor differences to to the finished article throughout.

The storyboards measure 11" x 8.5" and remain in excellent production used condition exhibiting only minor toning to the edges, overall fine.

A fantastic example of original production material from this Academy Award winning picture which remains highly regarded for its groundbreaking visual effects.