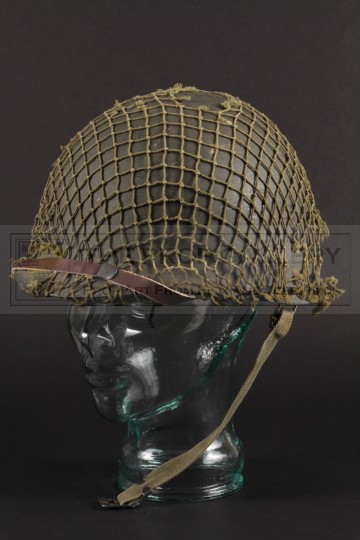 An original helmet used in the production of Saving Private Ryan, the 1998 war epic directed by Steven Spielberg.

Helmets such as this can be seen worn by the 2nd Ranger Battalion throughout the movie, this helmet was supplied to the production by Academy Costumes and is of plastic construction, these custom made helmets being used in lesser numbers than the metal examples. The helmet features the insignia of the battalion to the rear comprising of a number two in the centre of an orange diamond and is accompanied by an original genuine vintage helmet liner and scrim net, both the helmet and liner are stamped to the interior 'US ACAD' for Academy Costumes.

The helmet  measures approximately 11" x 9.5" x 7" and remains in excellent production used condition exhibiting some surface wear with holes to the scrim net and lacking one half of the chin strap, generally fine.

A highly displayable artefact from this highly regarded modern day classic which was the recipient of five Academy Awards.