2001: A Space Odyssey - The Dawn of Front Projection 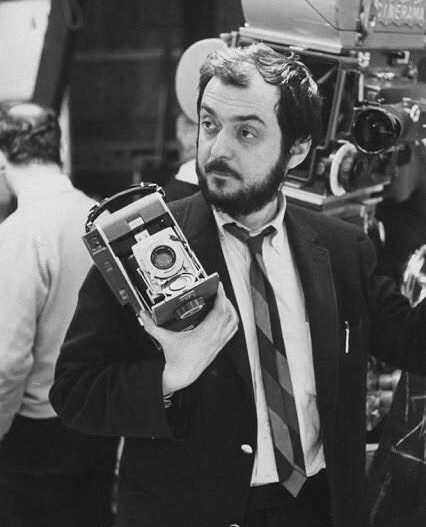 2001: A Space Odyssey is a 1968 science fiction epic starring Keir Dullea, Gary Lockwood and William Sylvester under the direction of Stanley Kubrick. In 1964, partly inspired by The Sentinel, an Arthur C. Clarke short story, Kubrick and Clarke began collaboration on a screenplay which would ultimately become 2001: A Space Odyssey. Filming would begin in late 1965 at Shepperton Studios and continue at the MGM-British Studios in Borehamwood with changes still being made by Kubrick as late as April 1968 and after the world premiere as he made the final adjustments to a project which had been four years in the making. 2001 is undoubtedly a masterpiece of film making; it broke new ground in cinematography and is frequently regarded as one of the most important and influential science fiction pictures ever made.

2001 is renowned for many things including its incredible production design at the hands of Anthony Masters, Harry Lange and Ernest Archer who were nominated for the Academy Award for Best Art Direction. The groundbreaking  visual effects combined the efforts of a multitude of talents including those of Douglas Trumbull, Wally Veevers, Tom Howard and of course director Stanley Kubrick, without whose unique vision and constant strive for perfection the masterpiece that is 2001: A Space Odyssey would never have been. The visual effects of the picture are notable for a number of techniques including the development of slit-scan by Douglas Trumbull used for the star gate sequence and the innovative use of front projection for the Dawn of Man sequence which is to be the focus of this article.

The Dawn of Man sequence is the now iconic introduction to 2001: A Space Odyssey which was inspired by Arthur C. Clarke’s short story Encounter in the Dawn and shows the progression of ape like primates and culminates in one of the most memorable match cuts in cinematic history. All of this was to be filmed against a backdrop of vast natural scenery and Kubrick had found a location with a unique beauty he felt was a perfect setting for his opening sequence, a remote area of the Namib Desert in Southwest Africa, now modern day Namibia.

Filming on location in Southwest Africa was far from ideal for a number of reasons including the logistical nightmare of transporting a large crew to the remote site, Kubrick’s fear of flying, uncertainty of the conditions and ultimately cost. With Kubrick adamant that he wanted to use the location and displeased at the possibility of painted backdrops it was decided that a small crew could be sent on location to shoot background plates which could be later combined with live action footage shot in studio. Traditionally during this period this would be realised utilising rear projection where the background is projected behind the live action set up, this however would not produce footage of the quality demanded by Kubrick, particularly not on the gigantic scale required for the Dawn of Man sequence, and blue screen matting was also disregarded for the same reasons. It was therefore decided to use front projection to combine pre shot backgrounds with a live action studio performance in camera. 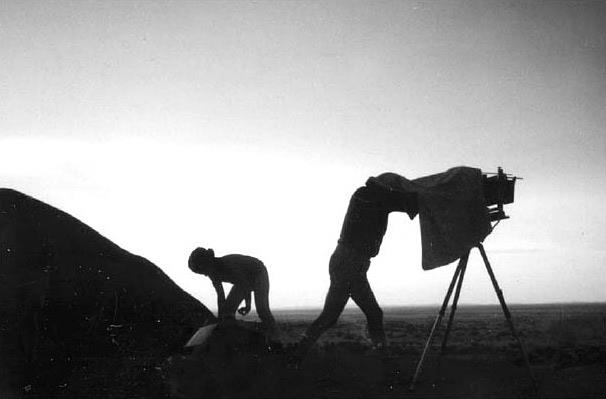 Front projection was not new as a concept although it had never before been used in a major motion picture and certainly not on the scale of which Kubrick required. The vision was to be able to shoot the live action performance on a set in front of a screen onto which the background plate could be projected thus providing the desired shot. The screen was made from hyper reflective Scotchlite material developed by the 3M company which would reflect a massive amount of light providing the perfect backdrop on which to project, it measured approximately 100 feet wide. Tests using the largest format available, 4” x 5” Ektachrome transparencies, proved mediocre with the ambitious Kubrick declaring that a 8” x 10” transparency would be perfect once projected, the fact that no projector large enough to accomplish this feat currently existed was not enough to put him off. 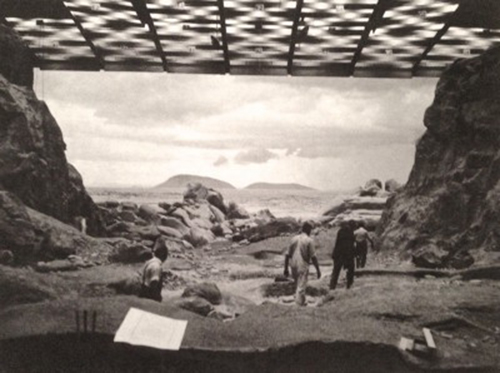 In 1966 a small unit was sent to the to Southwest Africa location selected by Kubrick to photograph the background plates on large format 8” x 10” transparencies. Present were production designer Ernest Archer, Andrew Birkin, Keith Hamshere and stills photographer Pierre Boulat who waited for the optimum conditions and took various shots which would later be selected by Kubrick. Meanwhile back in England work had begun on constructing a front projection device capable of projecting the 8” x 10” transparencies with the quality demanded by Kubrick. The rig was developed by MGM special effects expert Tom Howard in collaboration with Kubrick and was powerful enough to project the images to his specification with the transparencies mounted in glass plate holders in sterile conditions as any dust or other foreign object on the glass or transparency would be magnified many times over thus ruining the shot. The heat produced by this projector was such that it was capable of burning the emulsion on the transparencies meaning that the crew were careful to only expose the selected shots during filming with duplicate and rejected transparencies being used in line ups and test shots. 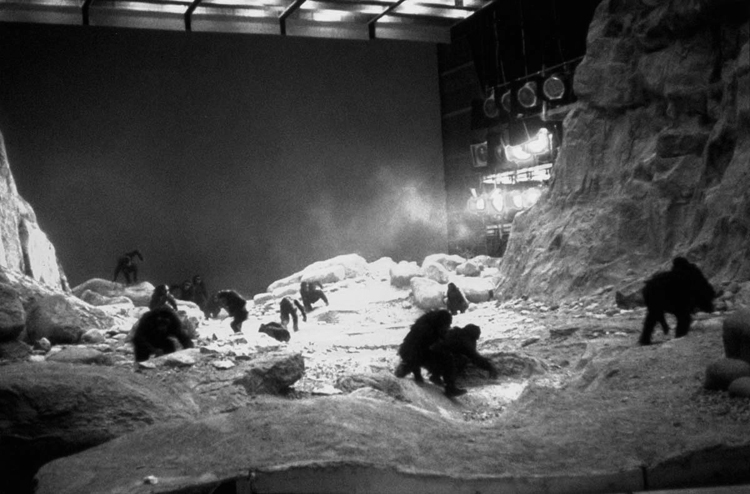 Several problems persisted with the ceiling of the sound stage having to be transformed with thousands of powerful lights allowing Kubrick to recreate the lighting from the location plates as accurately as possible, this meant each bulb being on its own switch which was itself a huge undertaking but allowed Kubrick the control he required in lighting each shot. In addition to this it was essential that the camera and projection rig be perfectly aligned, with the help of a mirror, on a common axis in order to avoid shadows on the projected background, this meant that the set pieces or performers in the live action foreground would fit their own shadow and essentially act as their own matte. With everything in place the Dawn of Man sequence was shot on stage 03 at the MGM British studios in Borehamwood by John Alcott under the direction of Stanley Kubrick.

These 8” x 10” transparencies on Kodak Ektachrome film are originals shot on location in Africa during the production of 2001: A Space Odyssey and developed for use in the Dawn of Man sequence. Despite identical shots not being seen in the final cut the fact that these transparencies have been loaded between glass plates ready for projection on the rig built by Tom Howard it is almost certain they were used during filming in some capacity. The shots are very similar to those used with one in particular having a similar cloud formation to one used extensively in the Dawn of Man sequence and it is clear that they originate from a shoot at a similar, or indeed the same, location. Despite the number of shots in the sequence Kubrick's reuse of the same plates was prolific, in some cases the same background plates were projected for several shots. 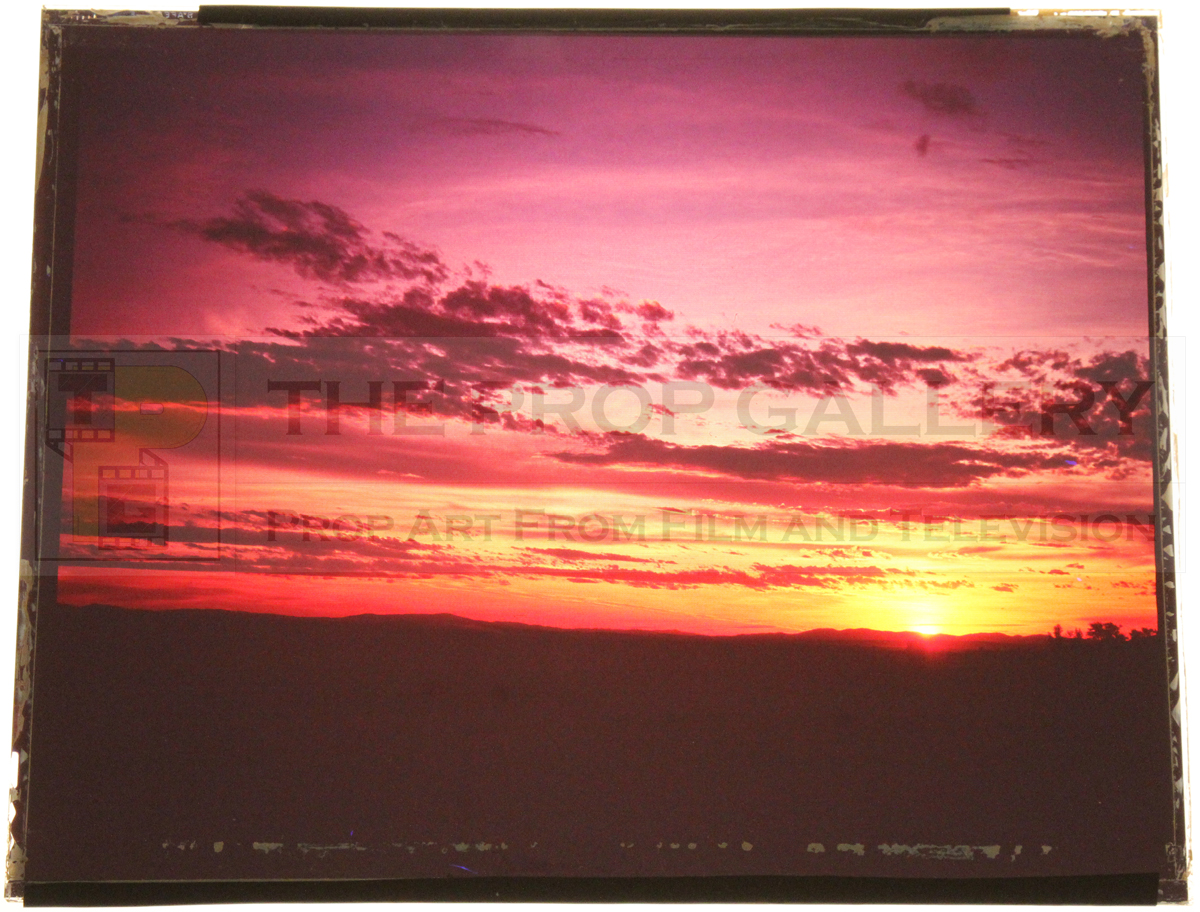 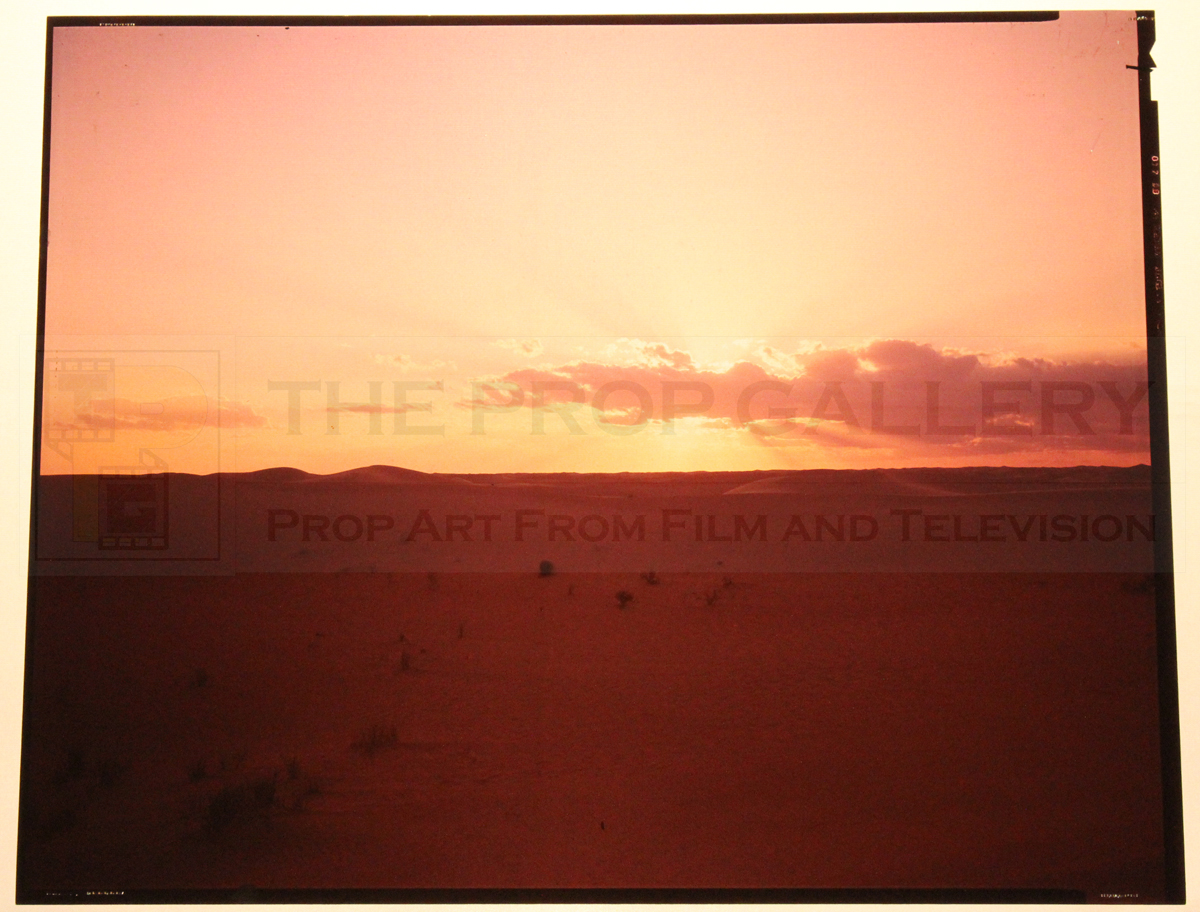 Original 8" x 10" transparencies shot on location in Africa for use in the Dawn of Man sequence. 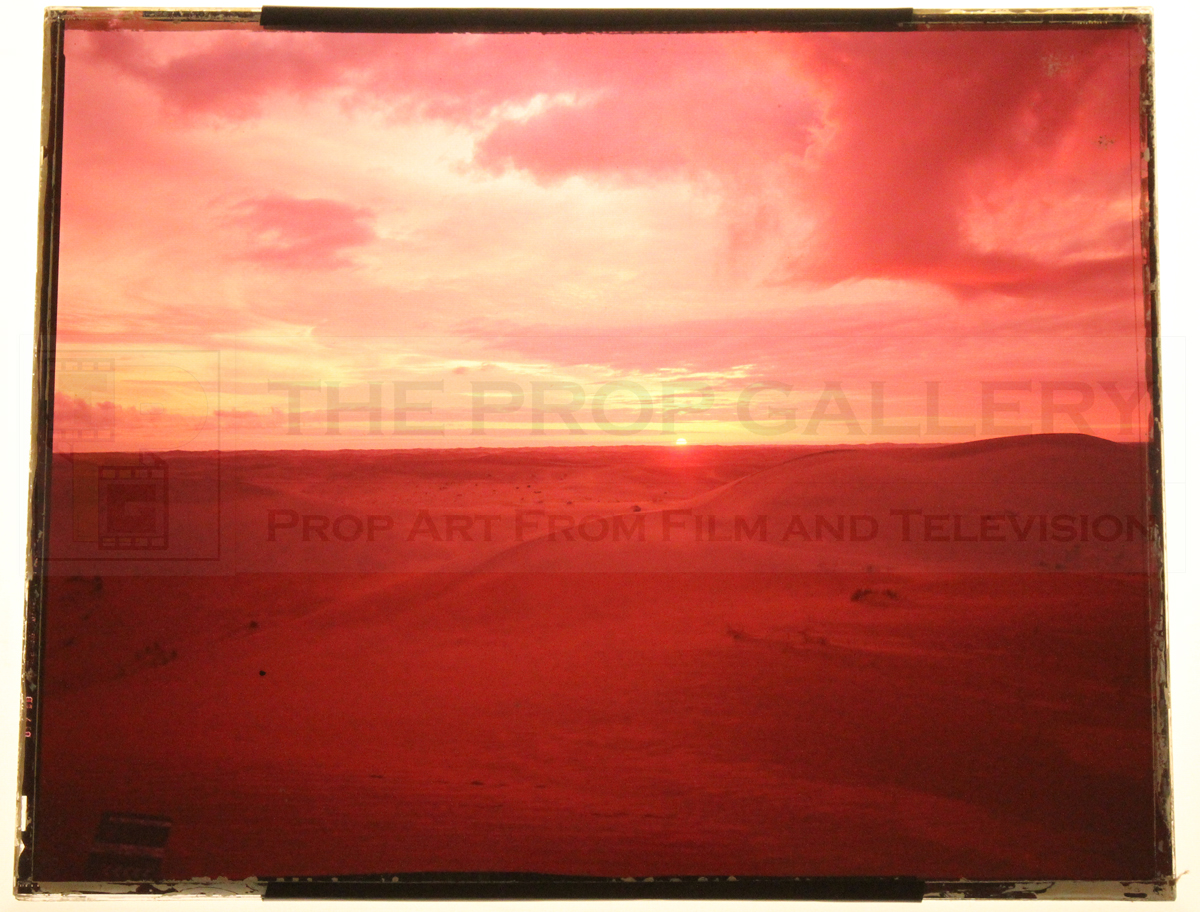 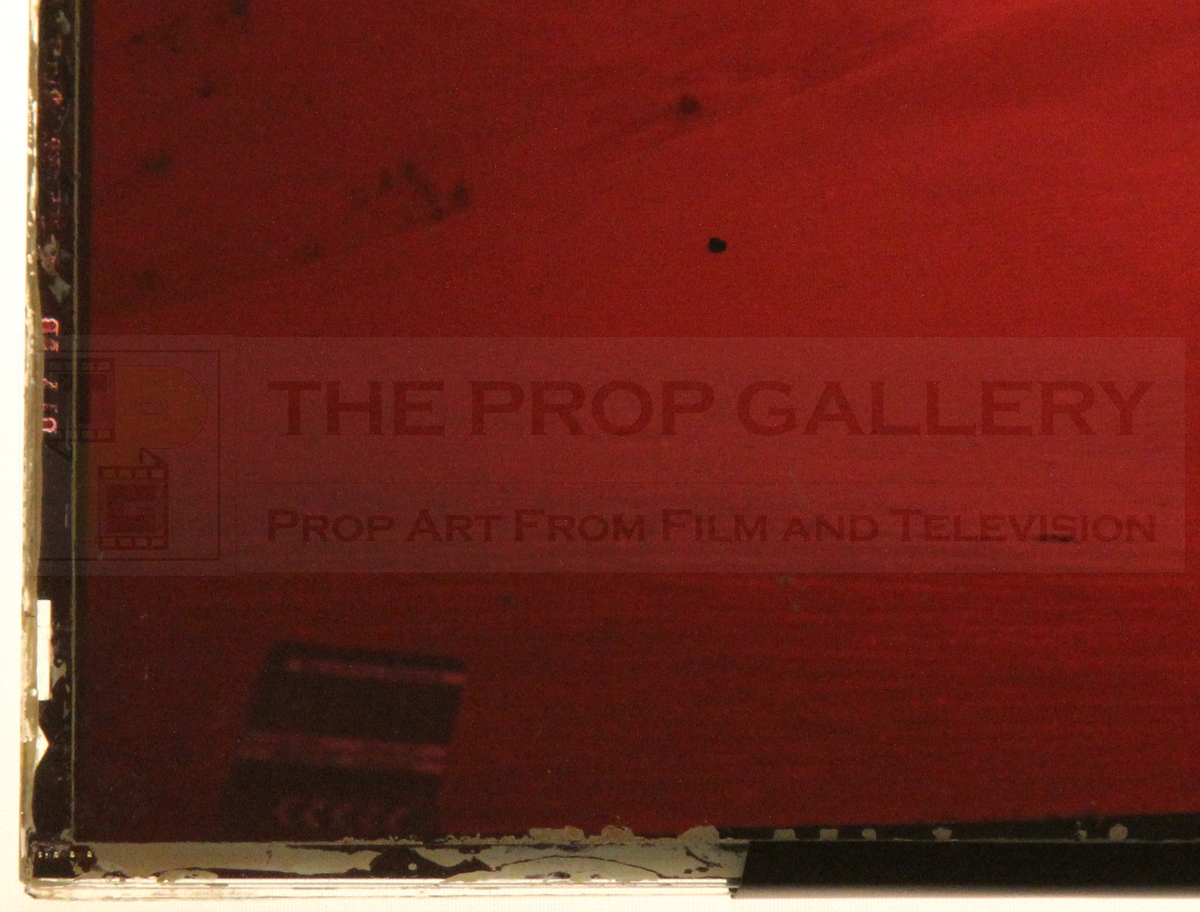 In this transparency you can make out a clapperboard in the bottom corner, sadly it is slightly out of focus and illegible. 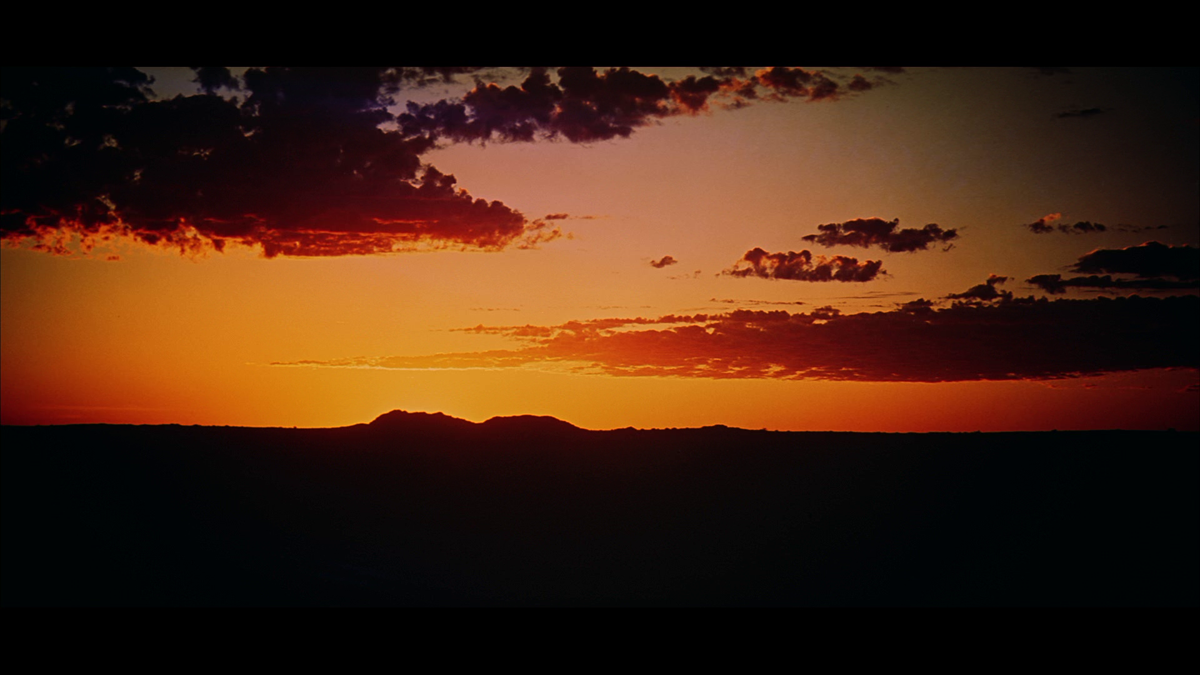 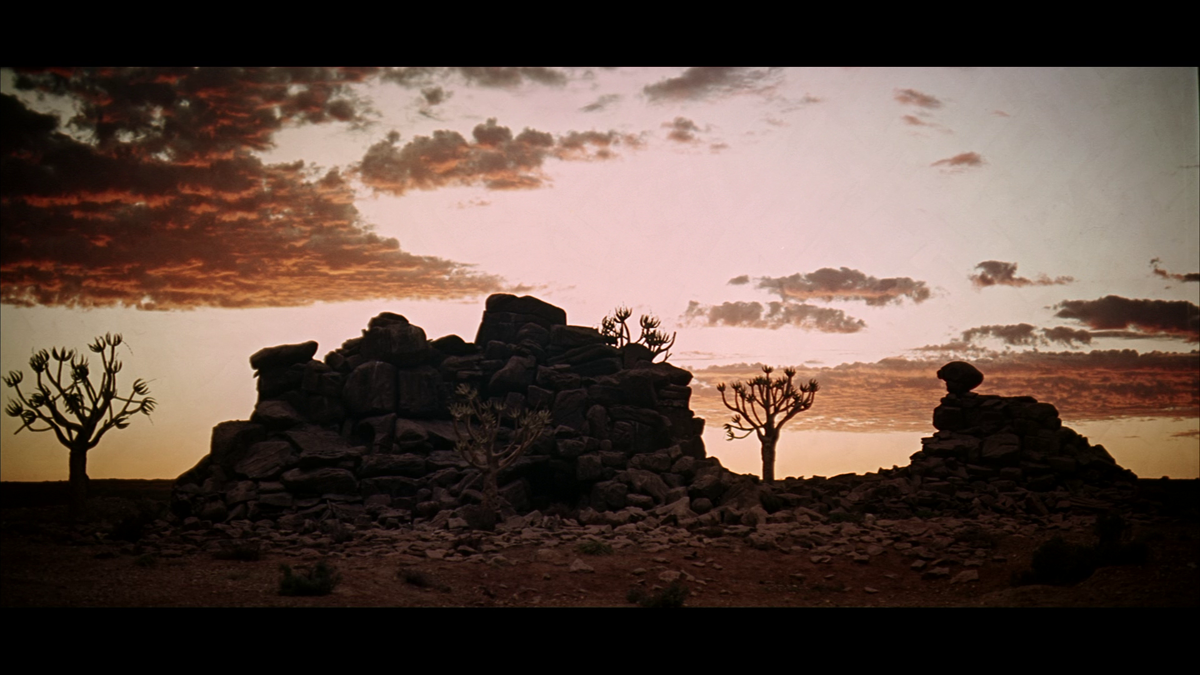 These screen captures show similar background plates, this particular one being used by Kubrick in several shots throughout the Dawn of Man sequence, note that the plate is horizontally flipped in the shot bottom left. 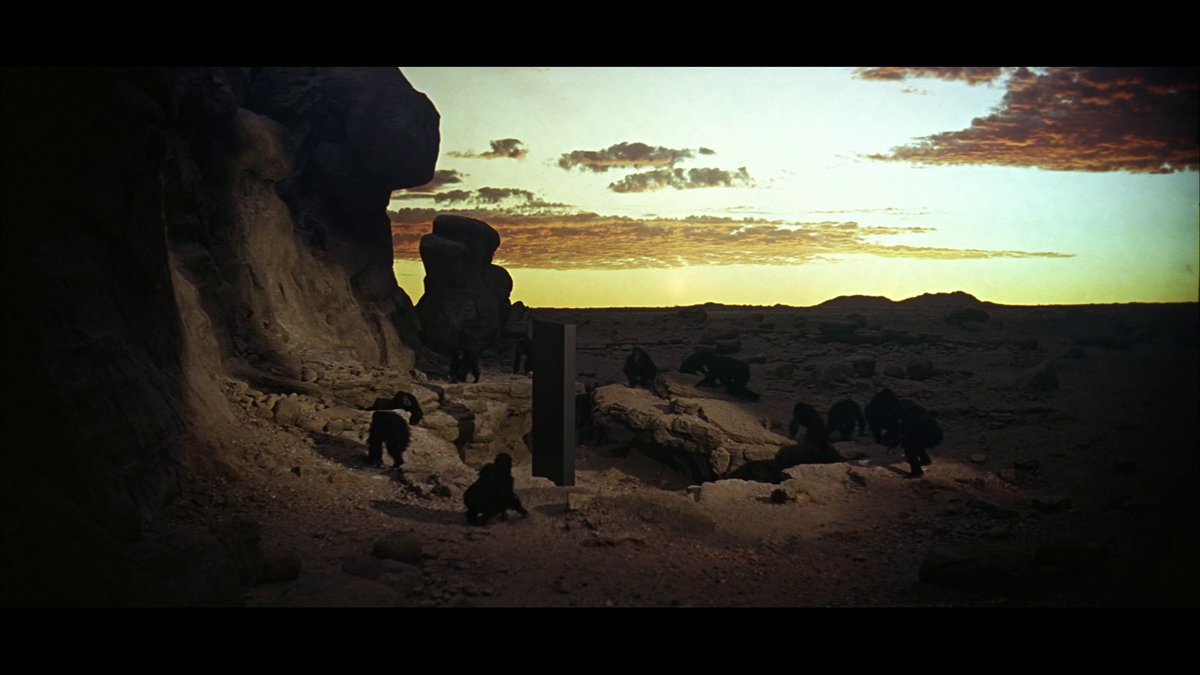 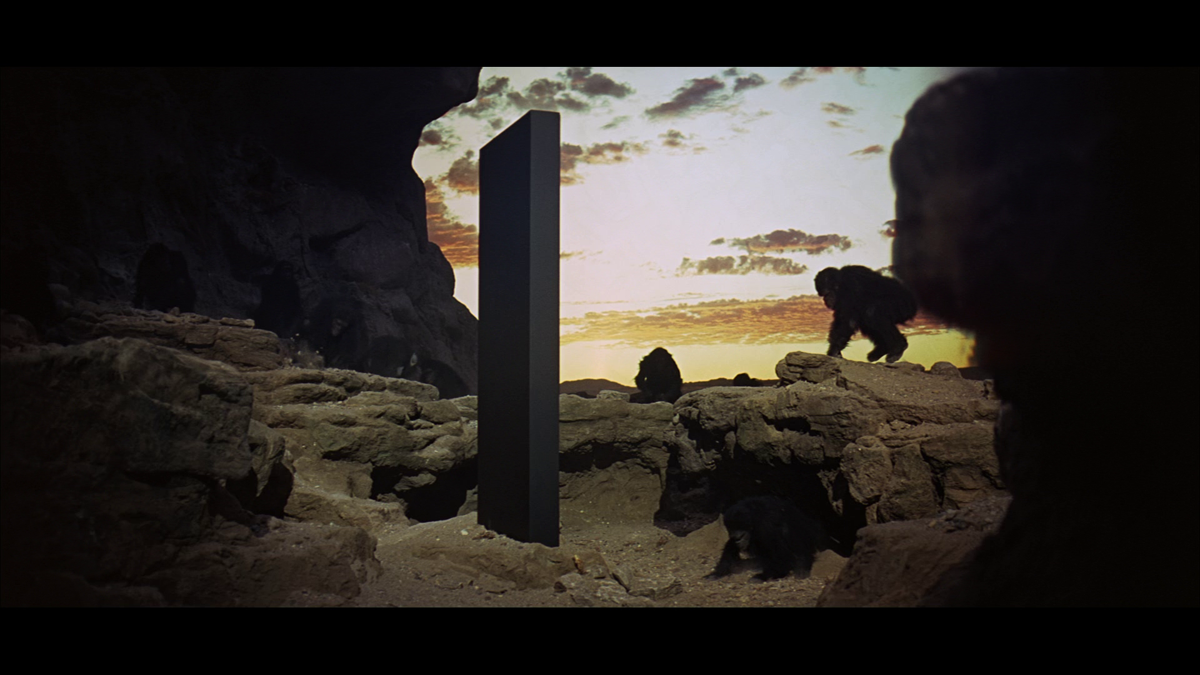 The plate shown below was also created during the production of 2001: A Space Odyssey, it is not absolutely certain if it was intended for use in the Dawn of Man sequence or other scenes. Once again this is an original 8" x 10" transparency but upon closer examination it is clear that this example is not a real life still taken on location but rather a manufactured shot. It is known that differing ways of generating the star backgrounds required were attempted, these included holes drilled in sheet metal and airbrushed paintings accomplished by visual effects wizard Douglas Trumbull which were shot on an animation stand. Others were 8" x 10" Ektachrome transparencies such as this which were back lit and shot from large painted artworks, the scene in this transparency is certainly reminiscent of other trademark shots used in the movie. 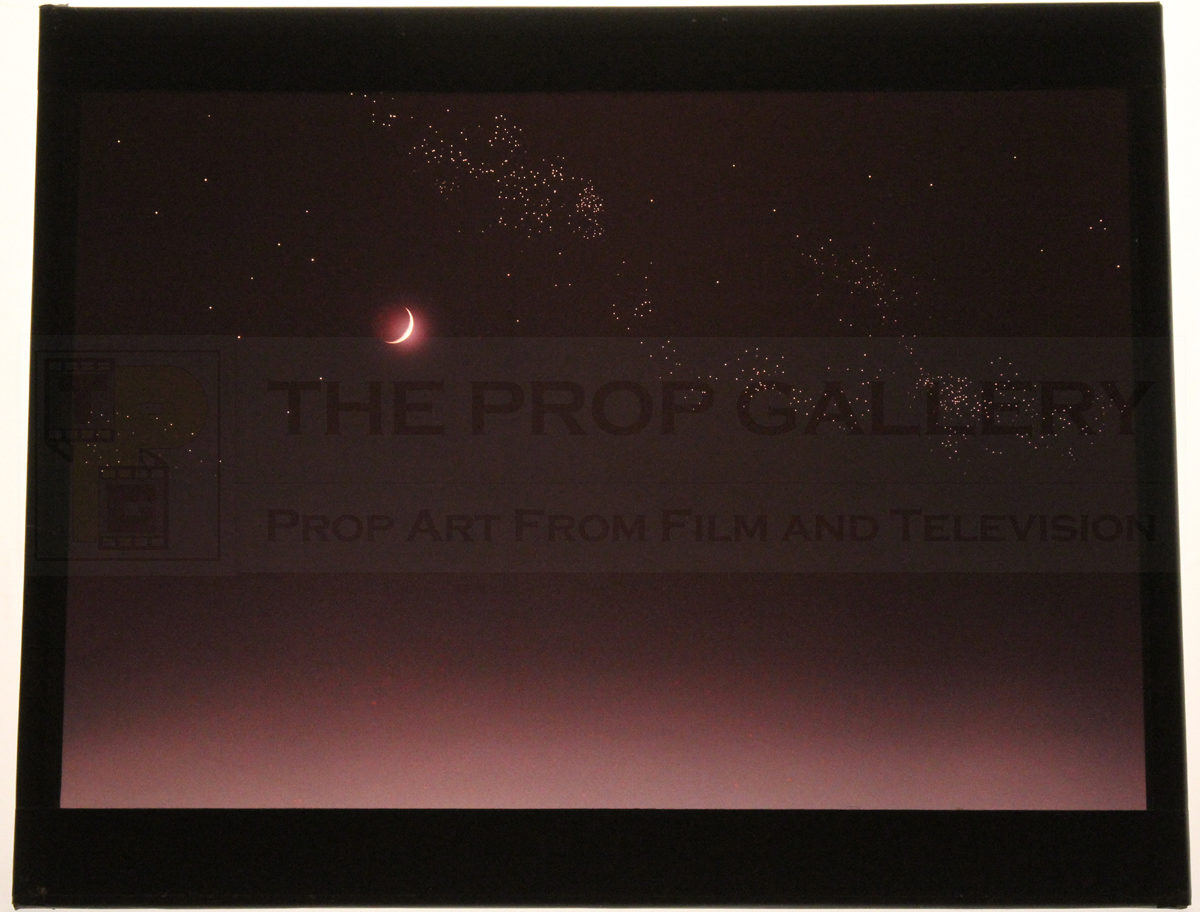 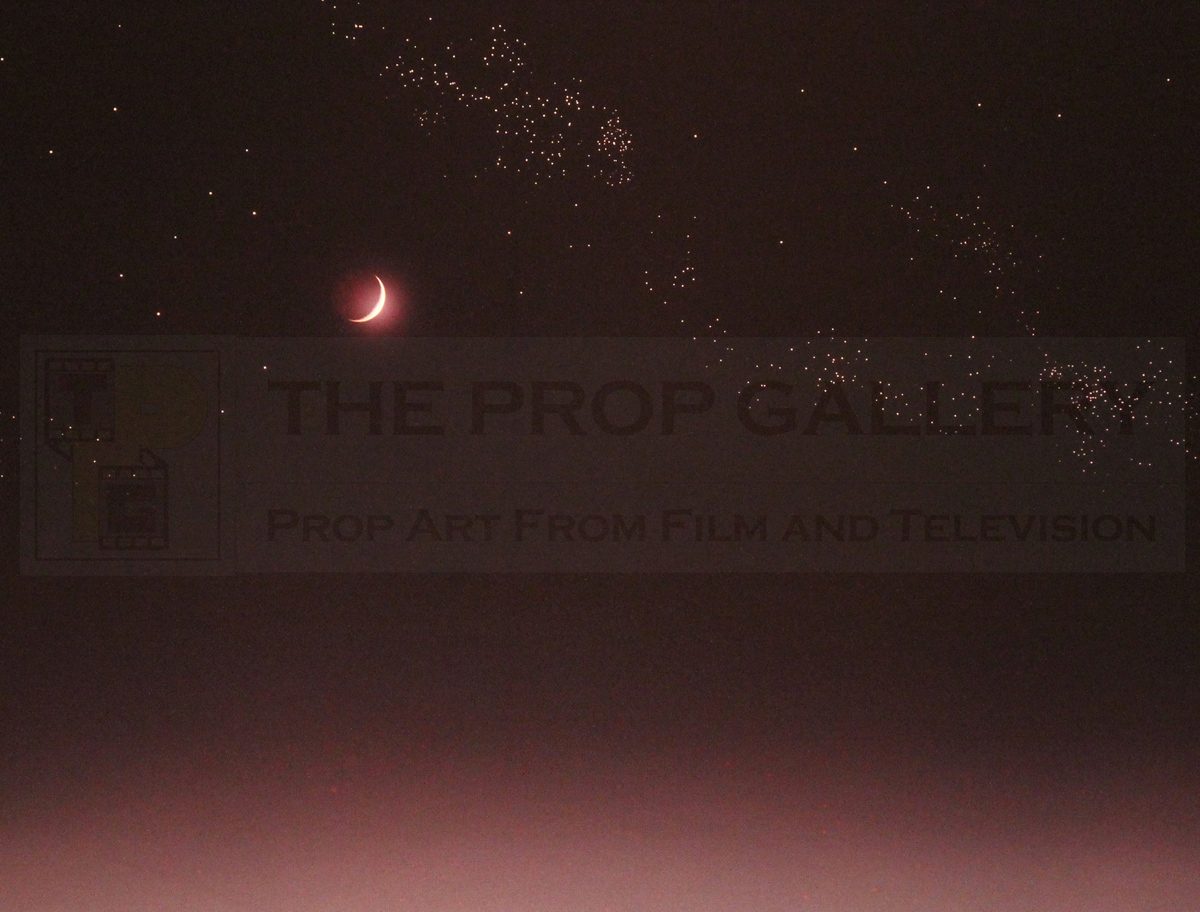 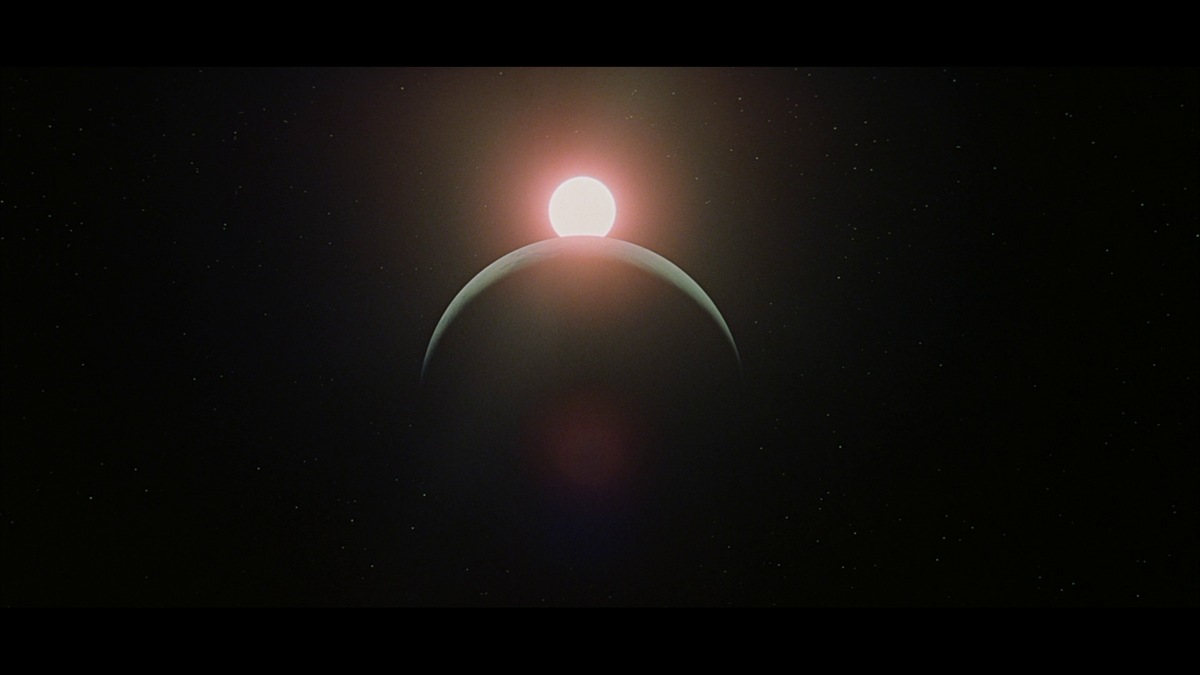 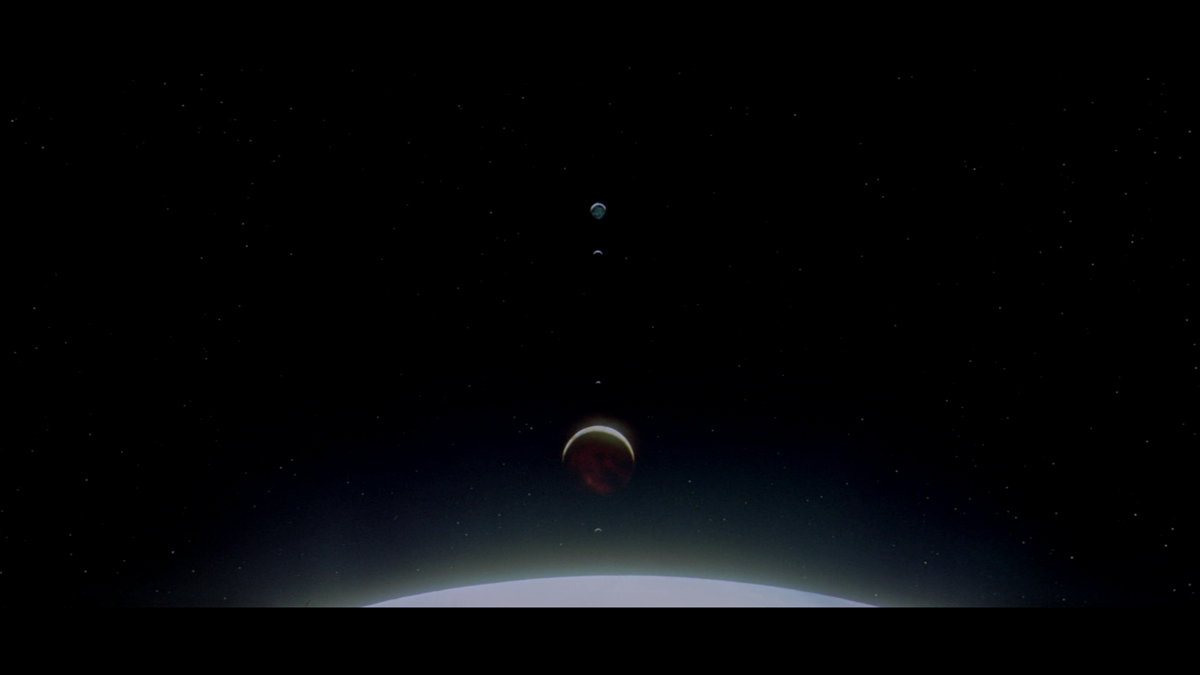 These transparencies originated through special photographic effects supervisor Wally Veevers, following his death in 1983 some of his equipment and effects were obtained by Joe Dunton Cameras and later sold off to various industry professionals, one of which had these transparencies in his collection for over 30 years before they were obtained by The Prop Gallery. An important part of the production process on 2001 these represent an incredibly rare example of original production material from this science fiction masterpiece and an important part of the pioneering use of front projection in a major motion picture.

2001: A Space Odyssey is frequently counted amongst the best films ever made; Kubrick’s masterpiece remains one of the most groundbreaking pictures of the genre which has influenced generations of filmmakers in its wake including Steven Spielberg, Ridley Scott and George Lucas who one referred to 2001 as “The ultimate science fiction movie”. The pictures revered special effects were recognised at the highest level in April 1969 when Stanley Kubrick was bestowed the Academy Award for Best Visual Effects, debate may rage as to the recipients deservedness of the award ahead of the other pioneering individuals who assisted in the field of visual effects but it was undoubtedly the vision, dedication and attention to detail of director Stanley Kubrick which cemented 2001: A Space Odyssey its undeniable place in motion picture history.