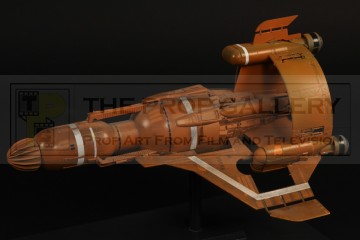 An original prop used in the production of Captain Zep - Space Detective, the 1983 children's science fiction television series produced by the BBC.

This miniature was built by noted model maker Bill Pearson for the aborted Dan Dare movie of the early 1980s and subsequently became the Zep One filming miniature used throughout the series which was shot in motion control under BBC Visual Effects Department designer Jim Francis. The miniature is constructed largely from EMA plastics and is heavily detailed with various kit parts, tape and decals in typical Pearson fashion with a weathered orange paint finish, it features threaded holes to the rear, side and underneath to enable the miniature to be rigged for filming.

The impressive filming miniature is presented on a custom made stand of painted MDF and measures approximately 21" long and 15.5" at its widest point, it remains in excellent screen used condition with some minor repairs.

An extraordinarily rare and highly displayable artefact from the production.